Hey! Hey! GUESS  WHAT The most awaited Diary of wimpy kid book 13 is now just here on your screen. There were lots of questions in you people minds that what will be the name or title of  Diary of a wimpy kid book 13 and when it is going to be released and what could be the color of it? How its cover will look like? and so on, So here we have come up with some information which may help to answer your questions.

Table of Contents show
1 Diary of a Wimpy Kid book 13 The MELTDOWN Release date, Name and Cover
1.1 Other Books of Diary of a wimpy kid Series:

Diary of a Wimpy Kid THE MELTDOWN book 13 Cover 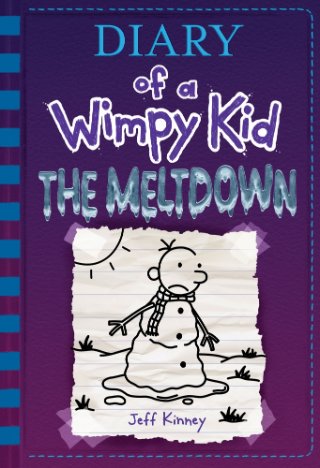 Diary of a Wimpy Kid book 13  The MELTDOWN Release date, Name and Cover

Here is the Good news for all the Wimpy kid’s fans that the Jeff Kinney the Author, illustrator and the founder of the book had officially announced the release date of diary of a wimpy kid book 13. He said that The book will be released on October 30 2018 by Amulet Books. This happened on 26 March 2018 Where Jeff Kinney was attaining one of the  Children’s books fair which was held in Bologna Italy, in which Abrams has announced plans to publish the 13th book in Jeff Kinney’s internationally bestselling middle-grade series, Diary of a Wimpy Kid. The title and cover of book 13 have been revealed in a national TV commercial and online at wimpykid.com on May 1. Which is now also available here on this site Diaryofwimpykids.com.

The publisher also explains furthermore that Diary of a Wimpy Kid series has sold more than 200 million copies across the world. In honor of this book series, Jeff Kinney will visit, along with Abrams president and CEO Michael Jacobs, to Worzalla, the U.S. printer of the books, in Stevens Point, Wis. Actually, This company has been printing the Diary of a Wimpy Kid books since the series starts publishing in 2007.

In the last year, 2017 marked the 10th anniversary of the Diary of a Wimpy Kid Book series. To date, the books have been released in 65 editions, 56 languages, and in more than 140 countries across the globe.

Click Here to Get all Books in one Collection

Other Books of Diary of a wimpy kid Series:

Diary of an awesome friendly kid