Kid series. He is one of the best friends of Rowley Jefferson and he is known for his misadventures throughout his school. And actually has trouble with his family, his friends, and his local middle school. He actually is very concerned about how popular he is at his school, and he desires a lot about being a rich and famous person when he grows up. That’s why tries to fit in at his school, but unfortunately, usually, he does not succeed in his efforts. He Faces many challenges, Gregory attempts to handle them very cleverly, but unfortunately, his stunts often backfire on him. 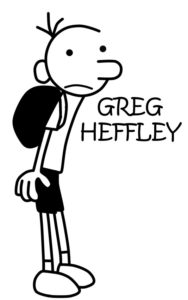 In the first film, Greg is easygoing and good-natured and like a normal looking guy. He is just trying to survive middle school, failing to realize that he is a bit too selfish, and once got beaten down by Patty Farrell(i think his school teacher because he insulted her.
In the sequel, Greg gets into seventh grade and he develops a crush on Holly Hills, who just moved in, but fails to get her to notice him as she mistook him for Fregley(hehe poor soul ), but they both learn they kind of like each other. Greg  Heffley (wimpy kid) and his brother Rodrick Heffley also compete against each other for “Mom Bucks”, a money donation made by Susan, Greg’s(wimpy kid) Mom, that rewards him and Rodrick for spending time together, and they can trade in for real cash. However, they see it as a way to get rich. In the film series, One important information we would like to let you know people are that Greg Heffley of Diary of a wimpy kid is portrayed by Zachary Gordon in this film.
Greg age is changing in every episode of the story Like He is 11 years old in Diary of a Wimpy Kid 1, 12 years old in Rodrick Rules and The Last Straw starts at 12 and then turns 13 in Dog Days, and remains 13 in The Ugly Truth and Cabin Fever which is the 6th Episode or 6th Book of Diary of a wimpy kid.
Source: Diaryofwimpykids.com
← Previous Post
Next Post →