Manny Heffley is another main character in this novel which is the little brother of Greg. He actually is a three years old toddler brother of Greg. Manny never gets in trouble no matter what, even when he really deserves it. He is just getting toilet trained. 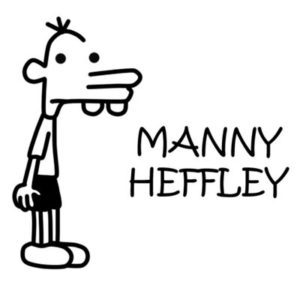 M Heffley is the younger brother of Greg Heffley(Wimpy Kid) and is far more spoiled than Greg and Rodrick (Greg’s Brother) combined. Mostly because he throws extreme tantrums to get whatever he wants heheh :).He was like having its own world. Manny has told on Greg for things he saw before talking age, such as breaking a sliding glass window, which had occurred two years before. Manny has cried in all the books (versions of wimpy kid diary) except The Ugly Truth. In Wimpy Kid, he cries because Greg pretends that he’s making Manny eat a spider (a piece of string). Manny accidentally eats the string and cries because of it.
In Rodrick Rules (Second book of wimpy kid), Greg makes a funny face to Manny( hahaha  OMG Greg, when their mom says, “You could have killed him!” Then Manny cries when she puts that thought in his head. In The Last Straw, he cries when Greg calls him a “ploopy”. In Dog Days, Manny cries on a family trip when Rodrick tells Manny that the hump seat Manny is sitting on is the least comfortable. He once crawled into Rowley’s sleeping bag at one of Greg’s sleepovers. In Rodrick Rules(Second book), he puts a cookie in Greg’s game slot causing the entire console to break. He apologizes to Greg by giving a ball of tinfoil with toothpicks sticking out of it(as he is also the brother of Greg hahaha so also know how to deal with Greg.
← Previous Post
Next Post →