Over 200 million books in the printed form around the world and millions of readers, guess what I am talking about, yes, you are right. I am talking about the WIMPY KID. What is this all about? Why are there so many readers? Why this series is translated to so many languages? What is the reason that you will find its addicts in every part of the globe?
Well, to find the answers to all these questions you will have to read the blog till the end because it is going to be very exciting. Let’s have a brief history of the series. 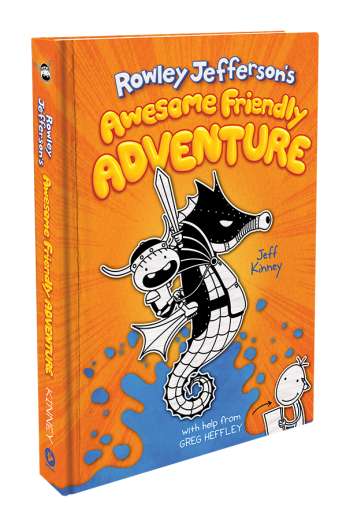 The series was started back in 2004 and was printed in 2007 for the first time. It has over 200 million copies that have been published in 76 editions and translated in 64 different languages. After having this brief history of the series that has much influence on kids, we now are moving to the next edition of the book that is going to be released in April, this year.

NEW YORK (AP) — The “Wimpy Kid” and author Jeff Kinney are both embarking on new paths.
Rowley Jefferson’s New book is going to launch this year in April, which is just a month away from now. Looking at the past track record, the book is expected to be famous like the previous editions. So, be ready kids it is coming nearer and nearer.
Amulet Books announced Thursday that Kinney’s latest novel is called “Rowley Jefferson’s Awesome Friendly Adventure” and comes out April 7 with an announced first printing of 3 million copies, among the highest for any fiction writer. Rowley Jefferson, “Wimpy Kid” Greg Heffley’s best friend, is the book’s narrator. He will tell the story of “Roland the Kind” and “Garg the Barbarian” and their quest to vanquish the evil White Warlock. The book is a follow-up to last year’s “Diary of a Wimpy Kid” spinoff “Diary of an Awesome Friendly Kid.”

Looking at the widespread fame of the series it is expected that the coming book will once again be one of the leading selling books, especially for kids. According to the author “after many years of being on the road, it seems like the perfect opportunity to do something daring and spontaneous. I’m thrilled for the adventure that awaits, and I’m looking forward to epic moments with my fans along the way.” In fact, the author has is going to surprise his followers and fans by taking surprising tours of different places and bookstalls that will be scheduled for the various publishers and booksellers. Every day there will be a new destination and a publisher shop to surprise everyone there. This is a new way of promotion and why not as the author is so famous and living the heart of his fans. This will be a new experience for the author himself and his followers.
The coming book of the series will be called Book 15 and will have the following features.

The author of the book is Jeff Kinney and will be published by Abram books (Amulet Books) and Puffin Books and other publishers. The total number of pages will be 224 and reading pages will 217. This will call Book 15 of the series.
Something About The Main Character.

He has got everything that thinks as negative. He is selfish and egotistical who is always thinking about himself and does not take care of others. Dishonesty is another negative trait that he has got. He is a backstabbing guy that always criticizes others not in a friendly manner. Apart from that, he is lazy and sociopath as well. But if someone scratches his personality deeply he will be able to find that has got some outstanding features as well. He hates taking the blame for anything and gives due credit to his friends when they deserve. These qualities are very few in his life but these qualities can be considered the bright spots of his life.
He admits and keeps on saying that he has got no special talent or there is no strong quality that could make him a better person in society. Rather has got two hobbies, playing games and comics. There are so many other things for which you have to buy the book of the Rowley Jefferson’s Awesome Friendly Adventure.

Appearance Of Greg Heffley:
He likes black shits or black pants and white shirts. He also wares contact glass. His nose is oval and ear and his head circle.

Get your Copy of Rowley Jefferson’s Awesome Friendly Adventure   Here